In the upcoming elections to the European Parliament, a big role will evidently be played by how the candidates position themselves on the question of the threat from the ultra-right. Speaking during a meeting on the occasion of an anti-fascist march in London on 22 March, Ladislav Baláž, chair of the British-Romani association Europe Roma International, said everyone must be prepared to fight resurgent fascism in society.

Baláž also said that Romani people intend to gain a voice in the field of politics that will correspondingly reflect the position of this newly-forming nation of 10 million people now living in all of the states of Europe. „We call on the government of Great Britain not to turn Romani immigrants into scapegoats. We are part of creating a better society,” Baláž concluded, according to information from the Roma Community Care initiative.

Grattan Puxon of the „8 April Movement” [International Romani Day – Editors] also spoke from the podium at the event. He reminded those gathered that Romani people have already gone through the dark past of Nazi genocide, which cost them 500 000 lives, and it is horrifying that neo-fascists are again hunting Romani people down today.

Weyman Bennett of the United against Fascism initiative, which organizes events marking the International Day against Racism, welcomed the 200 000 Romani people who are newly-arrived in Britain and said he was pleased to see so many Romani flags on Trafalgar Square. A Romani delegation then left the event to deliver several letters to Prime Minister David Cameron.

One letter called for creating a comprehensive national strategy taking into account the existence of Pavee (the Irish Traveller ethnic minority) and Romani communities, which altogether number half a million people. The other question raised by the delegation concerned the completely inadequate representation of Romani people on the Prime Minister’s Holocaust Commission.

Since the delegation was ultimately not received at 10 Downing Street, Romani representatives have decided to try to deliver their letters on the occasion of International Romani Day, which will be celebrated on 7 April starting at 12 noon in the Cathedral of St. John. After the meeting a religious service will be held there to commemorate the genocide committed by the Nazis during WWII, followed by an anti-fascist march through London. 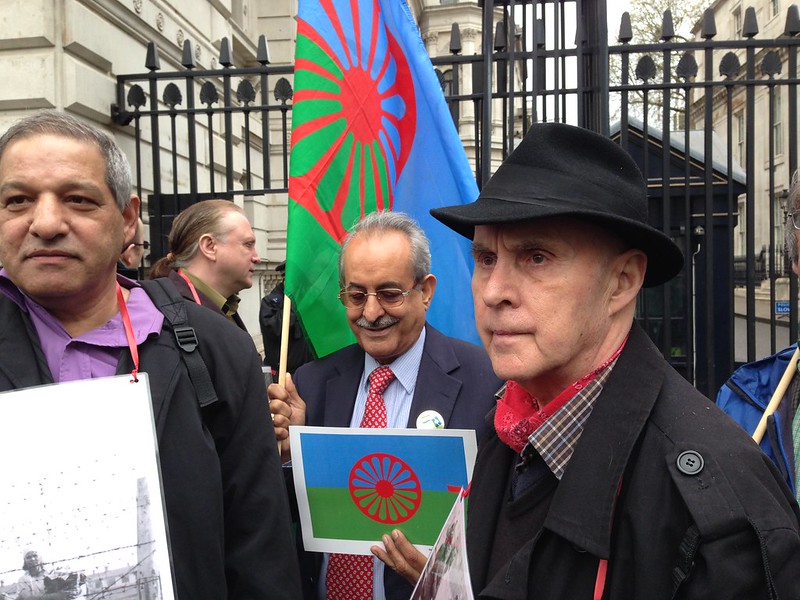 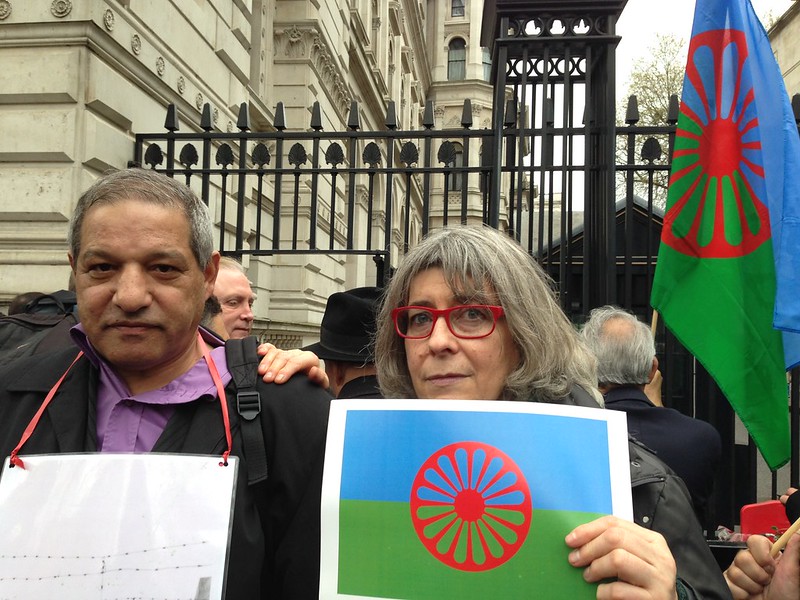 On the steps of St Johns Church, Waterloo after Holocaust memorial service

Delivered on:
27 January 2014 (Transcript of the speech, exactly as it was delivered)

Submit your views on how we can best preserve the memories and lessons of the Holocaust.

The timeline slider below uses WAI ARIA. Please use the documentation for your screen reader to find out more.

Can I just say an incredibly warm welcome to Number 10 Downing Street. I have to say, as Prime Minister in the last 3 and a half years I’ve had some extraordinary gatherings of people in this room, but I don’t think there’s been a more extraordinary gathering or a gathering I’ve been prouder to have than having you here tonight, on this Holocaust Day – a day when we remember the darkest hour of our human history, the Holocaust; a day when we decide to put away all and fight all forms of prejudice and hatred; a day when we think of the dreadful genocides that have taken place since the Holocaust. And it’s wonderful to welcome people here from Cambodia, from Rwanda, from Bosnia. It is an enormously proud day to have you in this room sharing these stories together.

And the stories I’ve heard tonight are just unbelievable stories. People who escaped from the Warsaw Ghetto. People – someone was telling me who was in 2 ghettos, 2 slave labour camps, 2 concentration camps. People who came here as part of the Kindertransport. Someone who showed me their diary, which their grandfather had written in in July in 1939 in Prague, and wrote in that diary, ‘Wherever you go, be a great daughter to the country that gives you a home.’

What I can say to the 50 Holocaust survivors here tonight: you have been incredible children, incredible lives you’ve lived; you’ve lived 10, 20 lives over for all those who died and all those who didn’t make it. And you are an amazing example to all of us. The bravery that you show by going into schools and colleges and communities and talking about the Holocaust and what happened is just so brave, it takes my breath away. I would have thought it would be so easy to want to forget, to stop thinking, to stop talking, but you showed incredible courage and bravery. And having 50 of you here tonight makes me incredibly proud to be Prime Minister of a nation with such extraordinary people in it. So, thank you from the bottom of my heart.

Meeting you all makes me realise what a sacred task the Holocaust Commission has to carry out, and can I thank Mick Davis for chairing it, can I thank the Chief Rabbi, can I thank the survivors who are going to serve on it. We have the heads of some of our best museums. We have people from the worlds of television and film. We have politicians of all parties – we have Simon Hughes from the Liberal Democrats, Ed Balls from Labour, Michael Gove from the Conservatives – can I thank you all for the work you’re going to do. We’ve got fabulous historians, like Simon Sebag Montefiore. We’ve got so many people who are going to carry out this sacred and vital task.

And it is so important because there will be a time when it won’t be possible for survivors to go into our schools and to talk about their experiences, and to make sure we learn the lessons of the dreadful events that happened. And so, the sacred task is to think, ‘How are we best going to remember, to commemorate and to educate future generations of children?’ In 50 years’ time, in 2064, when a young British Christian child or a young British Muslim child or a young British Jewish child wants to learn about the Holocaust, and we as a country want them to learn about the Holocaust, where are they going to go? Who’re they going to listen to? What images will they see? How can we make sure in 2064 that it is as vibrant and strong a memory as it is today, with all of you standing here in this room?

That is the challenge that I have set them. It’s a vitally important task. I can’t think of a more talented group of people to carry it out, but please, as survivors, tell them what you think. Tell them what you want to be as part of this commemoration. You have spent so much time talking about your memories and reminding all of us how we must never forget. One lady I was talking to had already spoken to 6 schools today; I thought I’d had a tough day! That is an amazing thing to do, and you do this day in and day out.

So, I promise you this: the Holocaust Commission chaired by Mick Davis with all those people on it, and this government ready to help, and politicians of all parties ready to help – we will not let you down. Tell us what you think we should do and let us make sure we commemorate these dreadful events, and make sure that here in Britain no one ever forgets what happened and we swear together: never again. 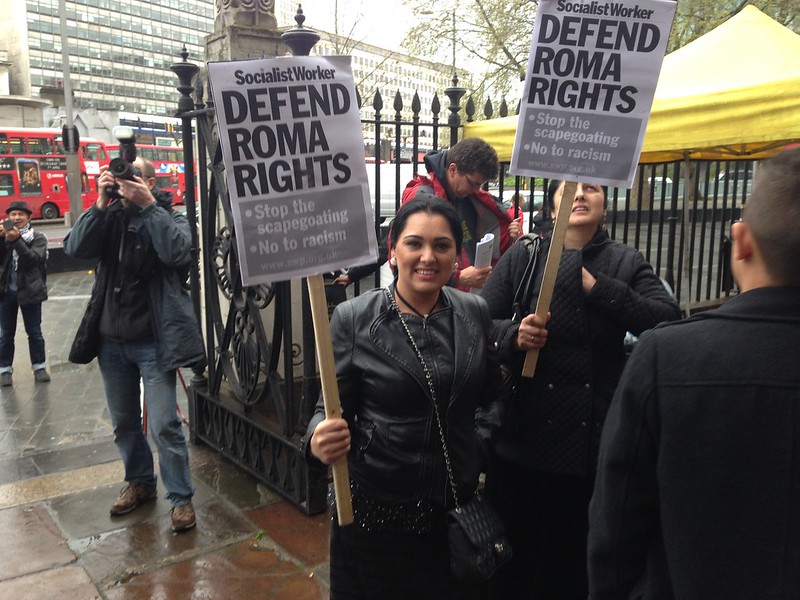 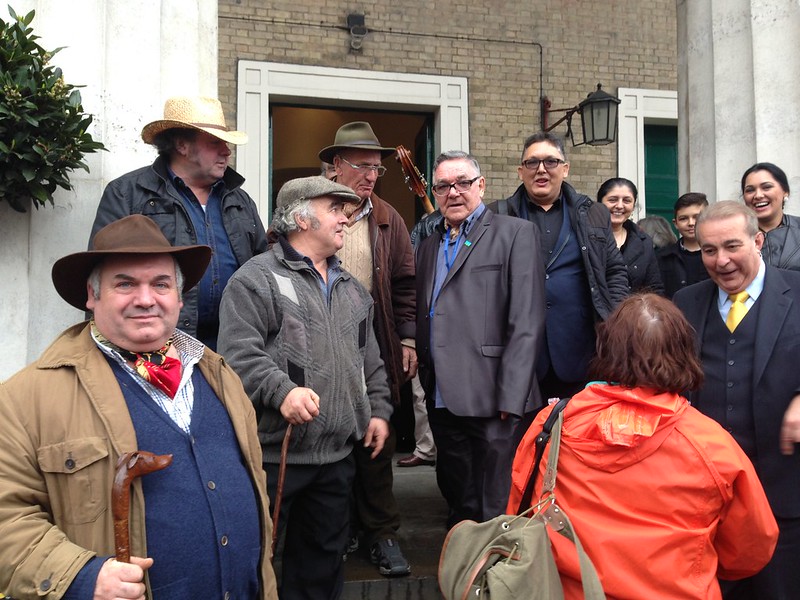 to see a world congress held in

Belgrade. At the weekend that

wish was fulfilled in the prestigious

setting of the Serbian Parliament

While the event, staged by the

World Roma Organization, had all

the trappings that could be desired,

it was unable to bring under one

roof all representatives of what is an

it echoed what everyone of us feels:

„Behind the facade of an image in Europe

and the world [there] is still apartheid.”

The organizers went on to compare

the present liberation struggle of the

Romani people with that of Black Africans

in the second half of the 20th century.

We are not short on common purpose.

That was demonstrated two weeks ago

when Roma Nation Day was celebrated

around the globe. There is a growing

„8 April” movement, vociferous on the

internet and spilling increasingly onto

Yet the grass-roots, to be met with

not far from the WRO Congree location

largely disconnected from the leadership.

Scared and confused, families at Belvil

count on NGOs to protest their condition.

In the run-up to Roma Nation Day

commentators reminded us that much

is owed to the lst World Romani Congress

back in 1971. That congress has become

a legend and a myth. Its programme

included local protest action over the

death of three children in a caravan fire.

Moreover what this congress lacked

was the mantle of a clear mandate. The

ago down the road in Zagreb, capital of

Yugoslavia are joined by a Tito-era highway

once named the Road of Brotherhood and

A handicap for the Belgrade event was

that such a spirit is wanting. The IRU

did not officially back this congress. Leading

members stayed away, some members joined

its 8th Congress this year, left a political

vacuum which the WRO stepped in to fill.

It may be noted in the context of

the first congress president and himself a

legend with  a street named cafter him,

was of a different hue from WRO president

Jovan Damjanovic, a deputy in the present

Berberski was an anti-fascist and member

of the Yugoslav League of Communists. He

fought for an upgrading of Roma from that

This was not achieved in his time. It was

enhanced, though not entirely accepted by

the broader movement, at the mile-stone

5th Congress in Prague when the definition

„nation without territory” was adopted.

Whether the WRO reference to Blacks in

America (another nation without territory?)

means that Damjanovic supports this concept

is yet to be seen. The clear reality, in terms of

daily life, is that since the end of the Cold War

Roma in their millions are more dispersed and

Two essentials are required to get us

out of the present hole: more protest action

and more democracy. Both depend on building

at the grass-roots. A nascent „8 April” movement

is appealing for co-ordination of mass protests.

at state and local level, as well as providing a

voter-base for the movement itself. This has

been exemplified in Serbia with the registration

the ERTF, the ERU and now the WRO.

Whether this plurality must continue or not,

mass mobilization and protest is as necessary

to effective leadership as oxygen to the human

body. The voice in the street will magnify

our voice in Brussels and Strasbourg, and even

in that forum for family-squabbles the UN.