In 1889, the little-known artist Valerio painted a chained-up Gypsy. Adriano Colloci included this picture in his book, Gli Zingari (The Gypsies). Valerio, the artist, signed it with his name and date visible in the upper left corner of the drawing included on page 89 of Gli Zingari. In 1987, Ian Hancock published the artist’s work, without his name and modified to look like a poster for a sale of Gypsy slaves in 1852. The poster appears in Chapter V, „The Post-Emancipation Situation”, of Hancock’s book „The Pariah Syndrome”. About this poster, Hancock says: „A copy of this poster was sent to me by Mr. Nicolae Oprescu of Bucharest. The poster appears to have been the model for a similar illustration in Colloci (1889: 89).”

It is obvious that „Mr. Nicolae Oprescu” is a pseudonym. The only Nicolae that Hancock knew was Nicolae Gheorghe: „Linguist Ian Hancock was a professor at the University of Austin in Texas and politically active in the Romani Union, contributing to the organization of the first international congress of Roma (London, 1971) and those that followed. Although they knew and appreciated each other, the two only met in person after the fall of the socialist regime.” (http://nicolaegheorghe.ro/with-ian-hancock/)

The nicolaegheorghe.ro site also shows us the picture in which Nicolae Gheorghe and Ian Hancock met in Romania. We are not sure that Nicolae Gheorghe would have sent the drawing in question to Hancock.

Particular evidence that directly implicates Ian Hancock is the date written by the artist Valerio on the drawing, 1889. The text subsequently added to the drawing by that mysterious Nicolae Oprescu also includes the date announced for the sale, 8 May 1852. A Gypsy slave could not be depicted on a poster in 1889, since in 1856 the Gypsies were officially emancipated by the Romanian State. That poster never appeared in the Romanian Lands! The artist Valerio probably made use of a young Gypsy whom he painted in 1889. Here is why the text added later is a modern forgery:

Mr. Dan Ungureanu, from the Department of Balkanic Studies at Charles University, Prague, wrote an article in which he proved that the language used on the forgery in Ian Hancock’s book is an invention by an English speaker, not that of a Romanian slave-owner, a Romanian-speaker from 1852. Here is the text from the poster, commented on by Mr. Dan Ungureanu, who calls the „work” of adding the text an outright „holy forgery”:

„A vinde un prim sălaș de robi sau sclavi țiganești print o licitație la amiaḑă a mănăstire d. st. ELIAS 8 mai M.D.CCC.L.II cine se compună din 18 omeni, 10 bajați, 7 femei & 3 ffete.”
(To sell a prime lot of robi or Gypsy slaves by an auction at midday at St Elias Monastery 8 May 1852 which consists of 18 men, 10 boys, 7 women and 3 girls).
Mr. Dan Ungureanu demonstrates that:
„a vinde” – is a calque of the English usage „to sell”.
„un prim sălaș de robi” – is another calque, from the English word „prime”.
„sclavi țigănești” – this term was not used in that period, the usual word was „robi”.
„print” is a mistake, „printr-o” would be correct, but „printr-o” is not used in the Romanian in the construction of the sample. No native speaker of Romanian would write that.
St. Elias Monastery did not exist at that time! Elias is a hospital built by a Jewish banker of Sephardic origin. The only monastery named for Elijah (Sfântul Ilie) was in Iași. I should add that „Elias” is an influence of the counterfeiter from English. Sfântul Ilie becomes Saint Elijah in English. The liar’s mouth writes the truth!
Mr. Dan Ungureanu gives evidence that the alphabet used in 1852 was a Latin-Cyrillic hybrid, therefore the text on the poster would have to have been written with the hybrid alphabet, not with the Latin alphabet!
„cine se compună din 18 Omeni” – no Romanian would say that, it is incorrect.
„10 Bajați, 7 femei & 3 ffete in condiție fină” – this is comprehensible in Romanian, but it is not normal usage. But it is used in English: in fine condition.
Mr. Dan Ungureanu commented on the typeface used in falsifying the drawing of 1889. That typeface is one created by Francisco Lucas Vezino of Seville in the book Arte de Escrevir (Art of Writing), Madrid, 1577. „Letra del Grifo” is the name given by Francisco Lucas to this typeface. Mr. Dan Ungureanu is rightly surprised by the fact that this word, Grifo, appears on the fake poster in the bottom left corner. But, as I said, the hand of the liar writes the truth! And according to Mr. Dan Ungureanu, on googlebooks, where there are two copies of the book Arte de Escrevir, exactly the two pages with the Grifo typeface are missing!
The two drawings, the original and the fake, can be found on adevărul.ro, although without our observations:

The original drawing by Valerio, from Colocci’s book, is dated 1889, as I have said, but in the picture posted by adevărul.ro the date is not shown. Beneath the drawing, on page 89 of Colloci’s book, is written Zingaro in Catene (Gypsy in chains). 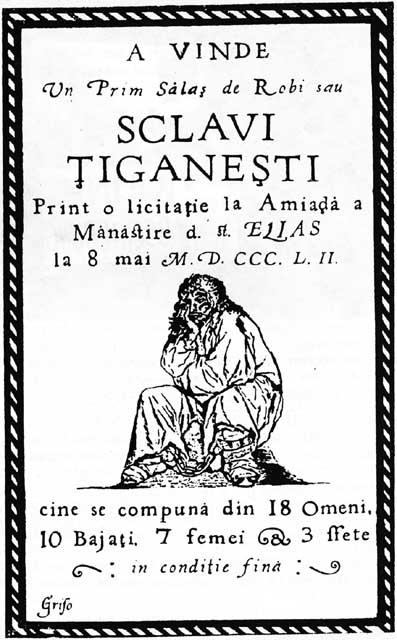